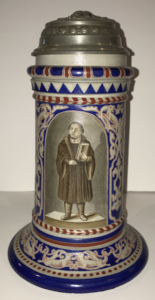 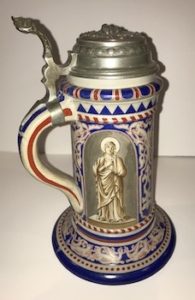 
For November I have selected a stein decorated by the August Saeltzer factory of Eisenach a city in Thuringia, Germany featuring Martin Luther born November 10th, 1483. Eisenach is also the home the Wartburg, a castle built in the Middle Ages, and an important outpost securing the extreme borders of the Thuringian count of Schauenburg, Louis the Springer’s (Ludwig der Springer) traditional territories.

Martin Luther was a German professor of theology, composer, priest, monk and an influential figure in the Protestant Reformation. Luther came to reject several teachings and practices of the Roman Catholic Church. His refusal to renounce all of his writings at the demand of Pope Leo X in 1520 and the Holy Roman Emperor Charles V at the Diet of Worms in 1521 resulted in his excommunication by the Pope and condemnation as an outlaw by the Emperor and requiring his arrest. It also made it a crime for anyone in Germany to give Luther food or shelter. It permitted anyone to kill Luther without legal consequence.

Luther's disappearance during his return trip back to Wittenberg was planned. Frederick III had him intercepted on his way home by masked horsemen who were made to appear as armed highwaymen. They escorted Luther to the security of the Wartburg Castle at Eisenach.

While in hiding at the Wartburg Luther translated the New Testament from Greek into German. His translation of the Bible into the vernacular made it more accessible to the laity, an event that had a tremendous impact on both the church and German culture. It fostered the development of a standard version of the German language, added several principles to the art of translation, and influenced the writing of an English translation, the Tyndale Bible. His hymns influenced the development of singing in Protestant churches. His marriage to Katharina von Bora in 1525, a former nun, set a model for the practice of clerical marriage, allowing Protestant clergy to marry.

The Saeltzer factory came into existence at the beginning of the Historismus period in Germany. Founded in 1850 they began making a line of hand decorated enameled stoneware in 1870 using blanks purchased from Westwald, Fritz Thenn, H&R, Mettlach, and some porcelain blacks from Nymphenburg. Because the factory was founded in the same town as the Wartburg, this was commonly used as subject matter along with many biblical themes or reference to Martin Luther. The Wartburg became the symbol for Evangelical theology due to the fact that Martin Luther sought shelter there.  The company ceased operation after 1930.